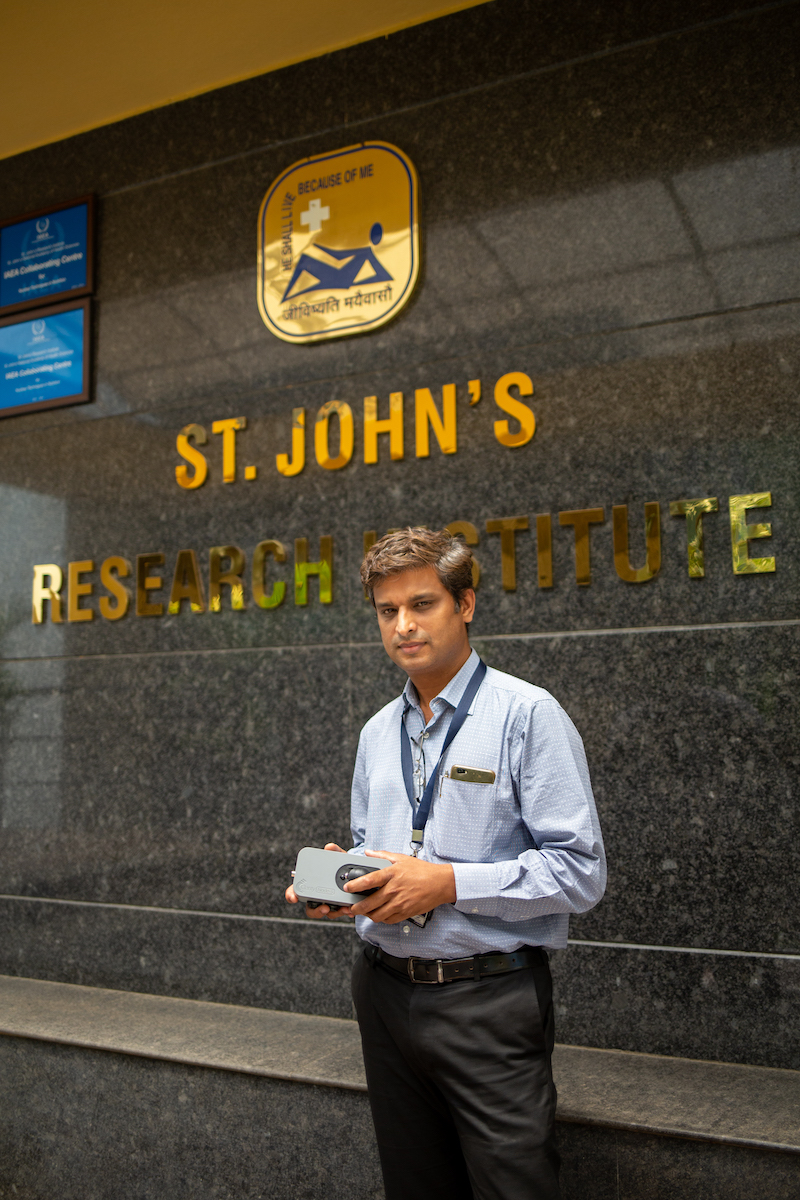 “It’s essential that there is better monitoring of air quality in Bengaluru, to improve our understanding of individual exposure patterns in the city.”

14 of the 15 most polluted cities in the world can be found in India. [1] However, the air pollution crisis in Bengaluru has not been in the spotlight. Cases of child asthma, upper respiratory infections, chronic pulmonary disease, as well as heart attacks in young people are increasing. [2] Initial data analysis points to air pollution, however, there has been no comprehensive monitoring of evidence to assess the health impacts on people living and working in the city.

Air pollution in India leads to at least 1.2 million premature deaths each year. India has one of the world’s highest exposure levels to PM2.5 fine particulate pollution, with an annual exposure average of 90 ųg/m3. More than 77% of India’s population is exposed to air pollution levels that are higher than the National Ambient Air Quality Standards.

Bengaluru is the second fastest-growing major metropolis in India. Once known as the ‘Garden city’, Bengaluru has seen profound changes, with rapid urbanisation and drastic reduction of green spaces and tree cover. The sources of particulate matter (PM) which can harm our heart and lungs, unlike that of Delhi, are not ‘regional’, but ‘local’. Key sources responsible for Bengaluru’s poor air quality include vehicles, waste burning and road dust.

In addition, air quality monitoring in Bengaluru is inadequate, with only 10 online monitoring stations generating data in real-time, in a city of 12 million people. This system does not record data in all the city’s pollution hotspots, and does not capture the exposure levels of the population effectively.

The Healthy Air Coalition will be installing 40 monitors across the city in order to provide publicly accessible air quality data to assess the health burden of air pollution in our city and drive measures for improving Bengaluru’s air. 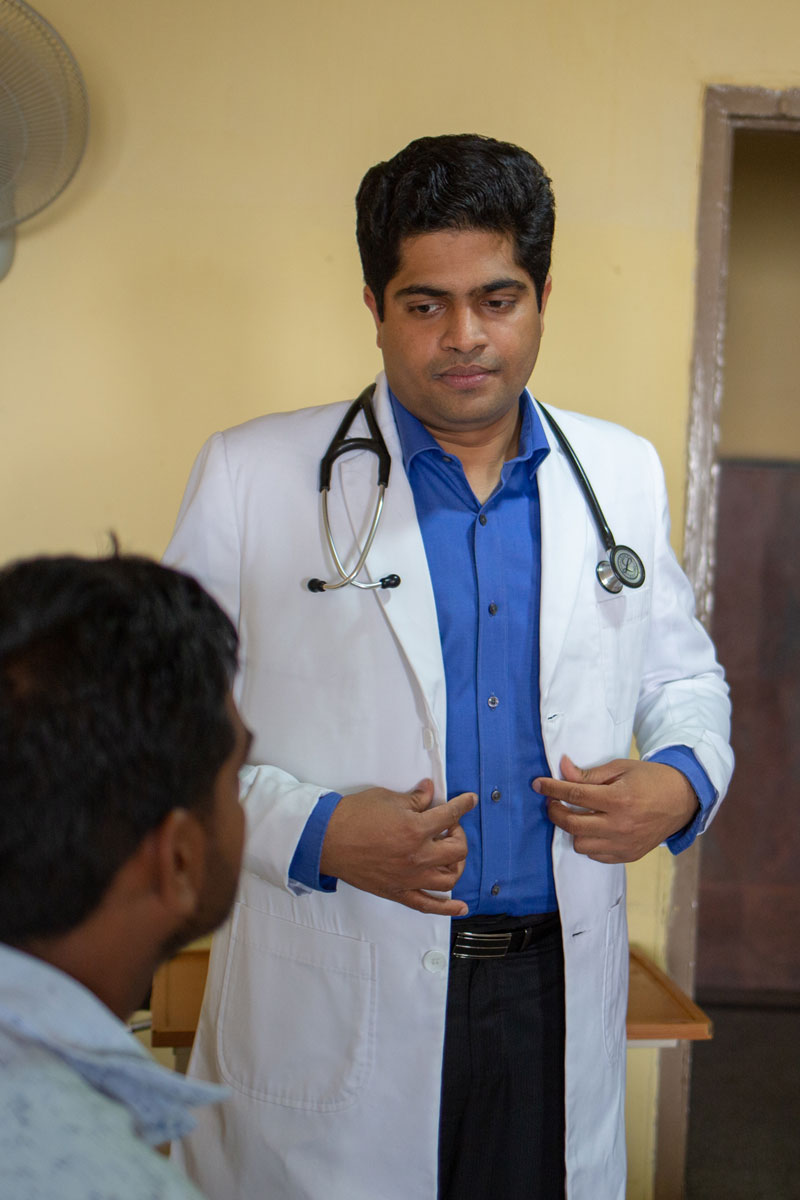 Dr. Rahul Patil is a Consultant Cardiologist and Head of Premature Coronary Artery Disease Division at the Jayaveda Institute of Cardiovascular Sciences and Research, Bangalore. He is carrying out a study on the effects of air pollution on cardiovascular health in patients below the age of 40.

“I was surprised to see an increase in heart attacks in younger people, without them having any of traditional risk factors such as hypertension, diabetes or obesity. With taking a closer look I found that many of these patients were either an auto or taxi driver from in and around Bengaluru. They are the worst hit as they are often stranded in bad traffic for long hours, and are exposed to high levels of pollution.”

“In order to reduce risk of heart diseases in Bengaluru, reduction of traffic especially its pile up at junctions is essential. As a measure of precaution, areas with dense pollution and high PM2.5 pile up should be avoided for regular walking and cycling “ 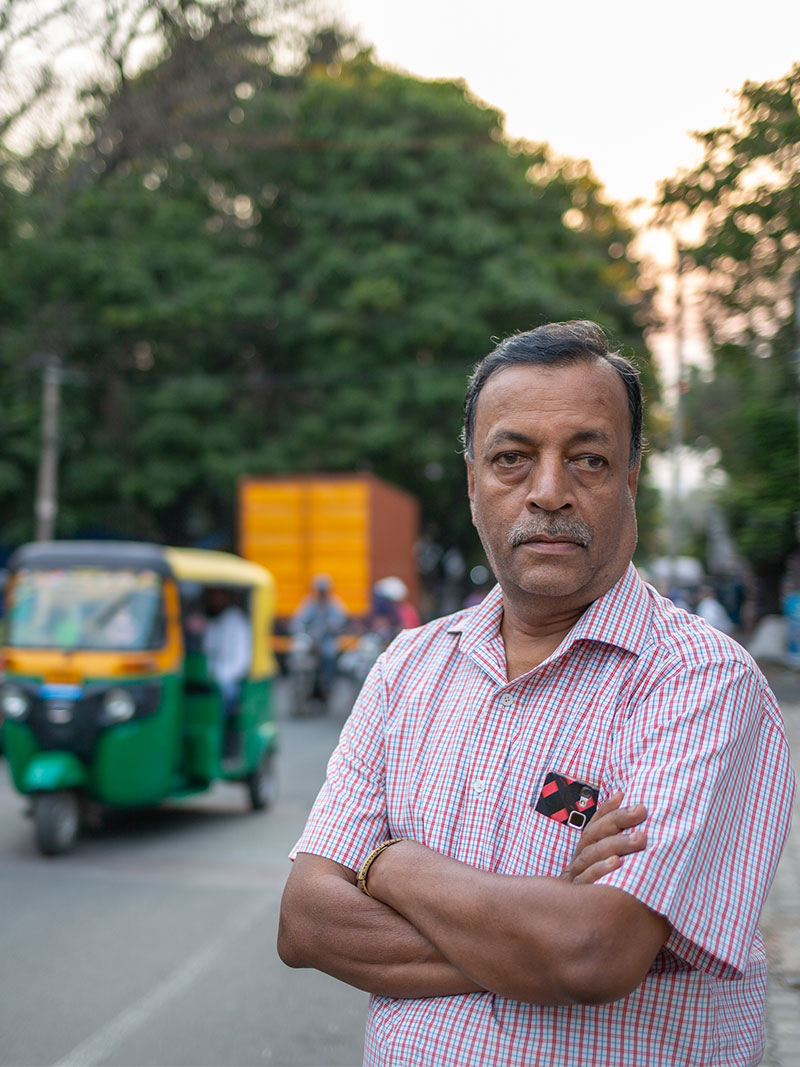 Suresh Vajapayam is a 66 year old retired bank employee. He’s been suffering from asthma for the last 45 years and has been on medication since then. He lives in Banshankari, a southern part of Bengaluru and spends most of his time indoors.

“I have been on inhalers for the last 40 years and I am a chronic asthma patient. I use a two wheeler to commute and the emissions and exhaust from the vehicles and road dust triggers an attack immediately and I carry my inhaler in my pocket at all times. Increased vehicular pollution and road dust has resulted in increased use of inhalers and medication. Back in the day in the 90’s, one inhaler used to 20-25 days and in the last 7-8 years it doesn’t last more than 10 days. I take many more puffs than I used to a few years ago. The air quality in winters in the city seems to be impacting me much more, the months of October to January are the worst for me”. 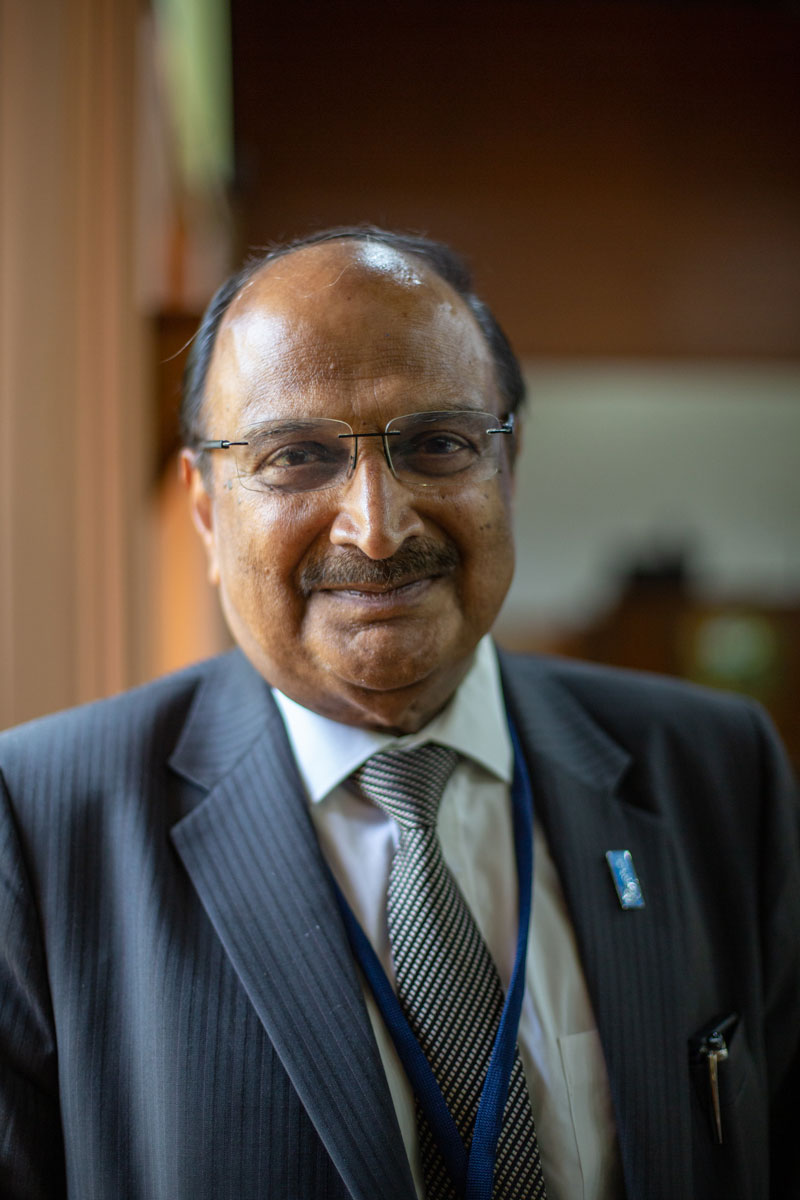 Dr. H Paramesh is a Paediatric Pulmonologist and a Professor at the Indian Institute of Science. Chairman: Lakeside Center for Health Promotion / Lakeside Education Trust. He’s contributed to many research findings on the harmful effects of pollution on health. He’s also the founder of the Environment, Respiratory and Allergy chapters in Indian Academy of Paediatrics.

“Air quality in Indian cities is deteriorating, also in Bengaluru. I’m particularly concerned about the effects of pollution on children, as we’re witnessing an increase in persistent asthma cases, and even persistent severe ones.”

But air pollution also increases the risk for health harm for adults:

“A study done using a small sample of human volunteers concluded that inhaling polluted cities air for 30 minutes will mean your lungs will need at least a month to heal, that’s how long your mucous membrane will take to recover.” 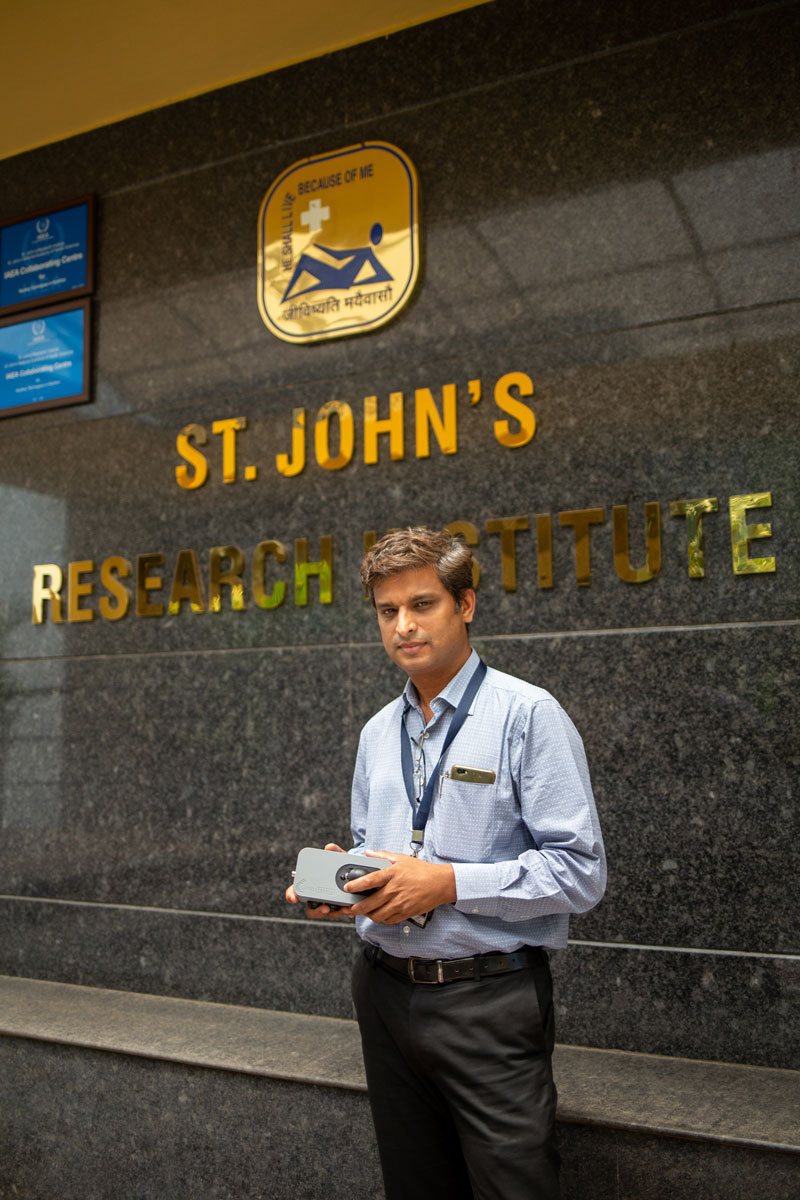 Dr. Prashanth is a researcher at St. John’s Research Institute and Medical College, with a background in maternal and child health. Dr. Prashanth and his colleagues were instrumental in bringing together the first-ever meeting of Bengaluru health sector representatives committed to cleaning up the air.

“It’s essential that there is better monitoring of air quality in Bengaluru, to improve our understanding of individual exposure patterns in the city. Traffic and dust are the main contributors to poor air, so we should know more about the pollution concentrations at hotspots in our city.”

“As a health researcher, my goal is to bring together a comprehensive picture of air pollution in our city, including hotspots where people are particularly exposed. Data on the magnitude of pollution will help guide policy makers in appropriate long term measures in tackling this public health challenge” 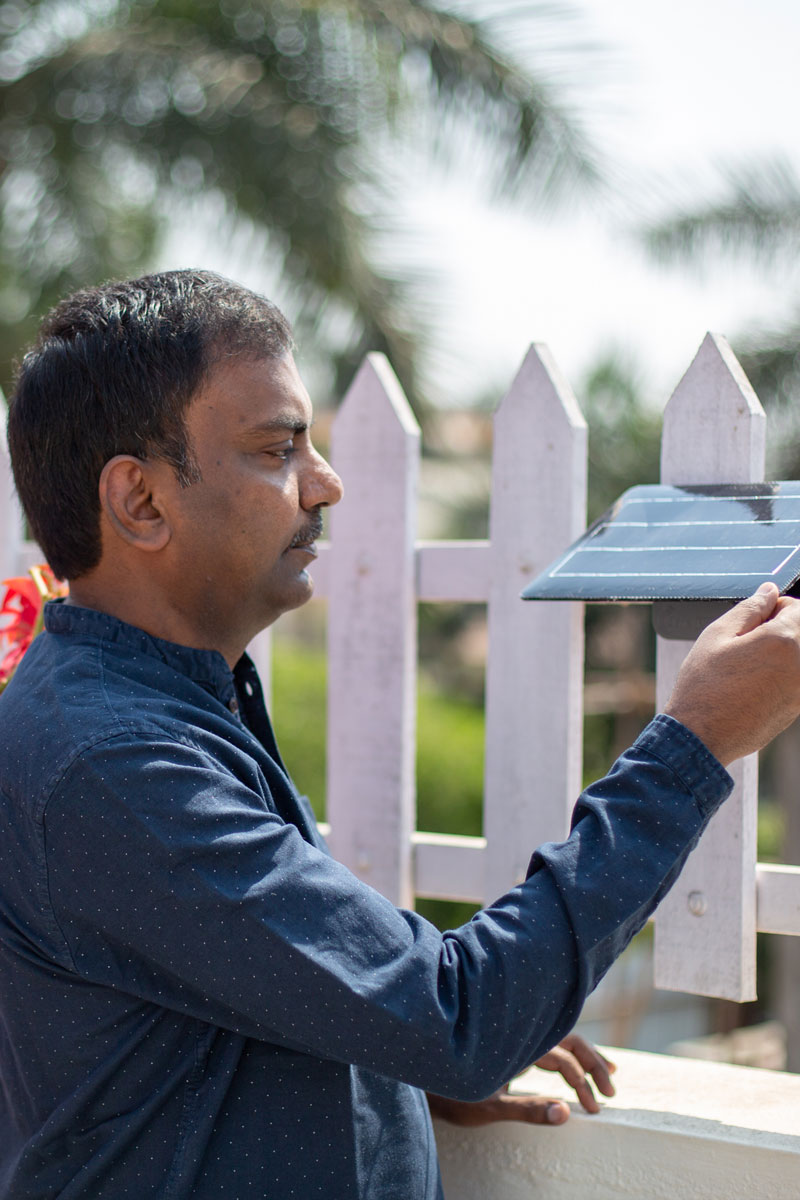 Whitefield Rising is community action group, bringing together people living and working in Whitefield, a district in Bangalore, to address matters of importance, including water, traffic, trees and pollution.

“Understanding air quality even for the highly educated residents of Urban India has been a major challenge. I am confident that the Healthy Air Coalition would help take a major leap in promoting awareness, establishing reliable air quality data and promote measures to improve air quality”. 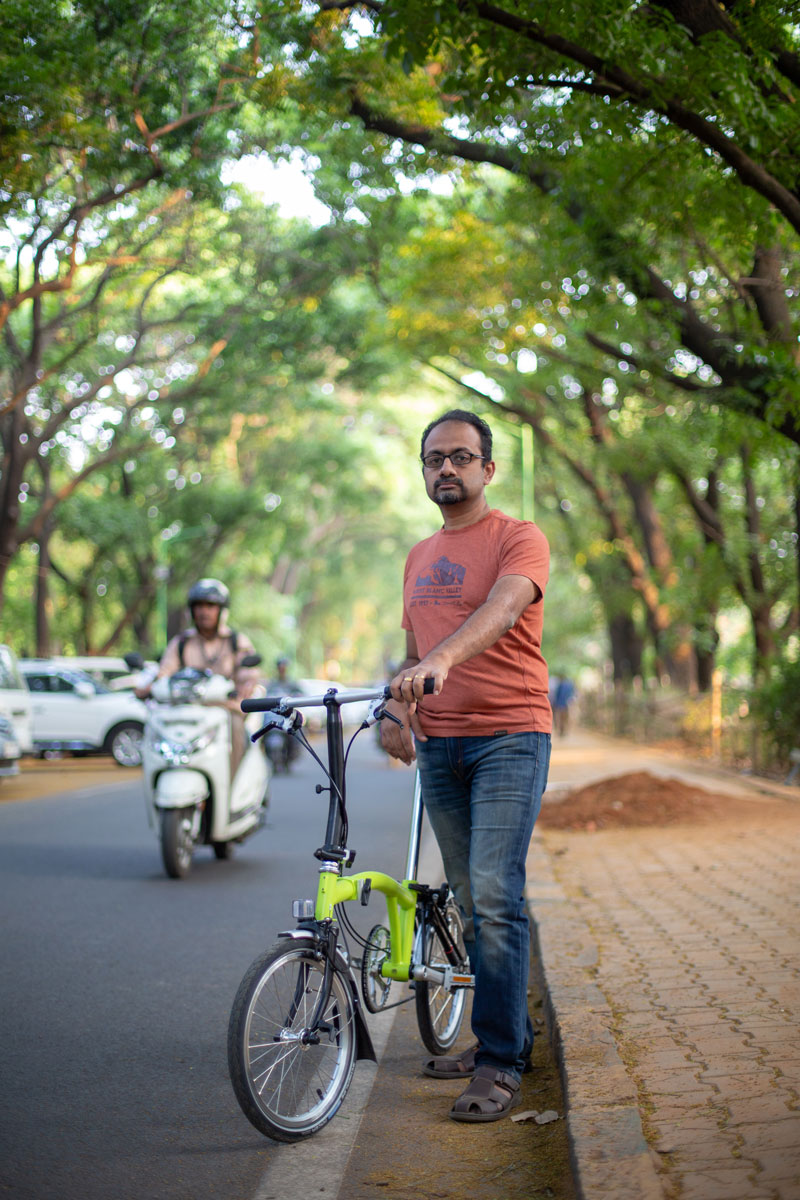 Sathya Sankaran is a cycling activist with a drive to increase cycling in Bengaluru. He is also the Bicycle Mayor of Bengaluru, which is part of a global initiative of cycling changemakers, or Bicycle Mayors, with a clear mission for half of all city trips to be taken by bike by 2030.

“In Bengaluru, like many other cities in developing nations, cars are the new cow. With 36% of school children suffering from reduced lung capacity in Bengaluru, it is our duty as citizens to tackle air pollution and transform cities into healthier, happier and more sustainable places to live.”

“Our focus should be on shifting public attitudes away from sources of air pollution towards walking and cycling that would bring health and economic benefits to people in Bengaluru.”

The Healthy Air Coalition will be installing 40 monitors across the city in order to provide accessible air quality data for the public to assess the health burden of air pollution in our city and drive measures for improving Bengaluru’s air.

Bengaluru’s healthy air coalition, brings together health researchers, heart and lung doctors, public health institutes and patients, concerned about the health risks from Bengaluru’s poor air quality. We come together to collaborate on air monitoring initiatives with different communities in the city; to share information and communicate about air pollution & health; to build the capacity of fellow health professionals; and to provide expertise input for air pollution control and reduction measures.

We invite doctors, public health practitioners, researchers, concerned patients and citizens to join the healthy air coalition in Bengaluru. Together, we can achieve air quality that remains within the safety limits prescribed by the Central Pollution Control Board and the World Health Organization. 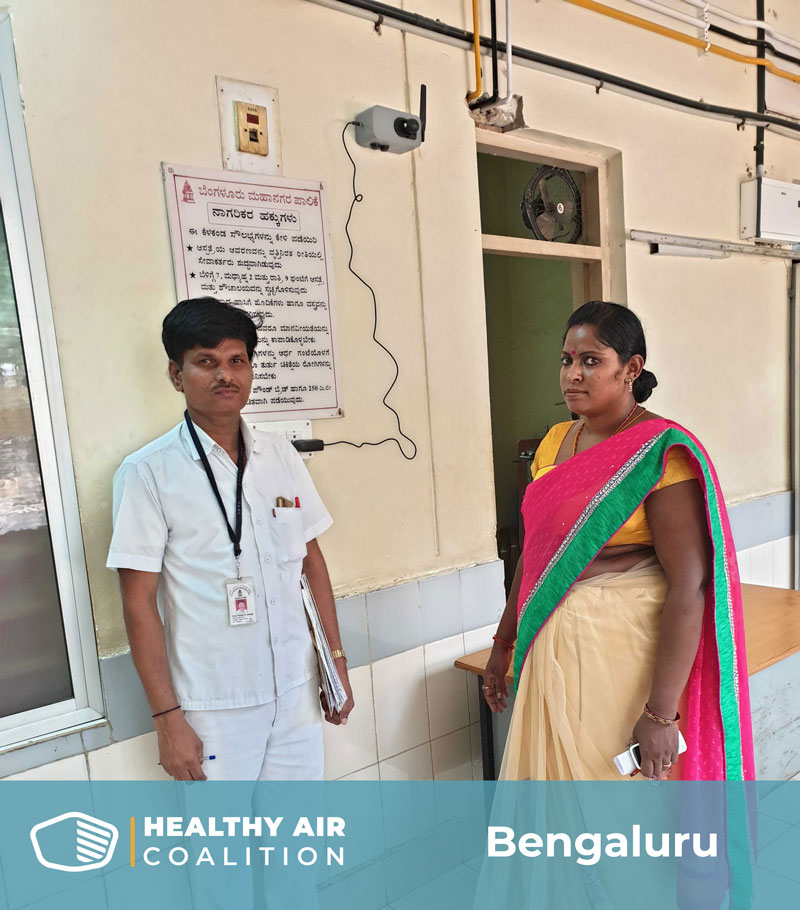 The time to act on healthy air for Bengaluru is now! 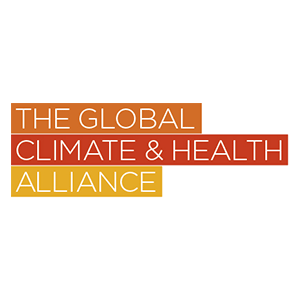