Unmask My City: Because everyone deserves clean air and a stable climate

Unmask My City launches today, which is World Asthma Day, to raise awareness of the threat of air pollution on health. This month, APHA’s Year of Climate Change and Health is looking at air quality and climate change, and our guest bloggers explore this topic in today’s post. Linda Rudolph, MD, directs the Center for Climate Change and Health at the Public Health Institute and hosts the US Climate and Health Alliance; Denni Cawley, MPA, is executive director of Utah Physicians for a Healthy Environment; and Jeni Miller, PhD, is executive director of the Global Climate and Health Alliance.

Air pollution is responsible for 200,000 premature deaths in the U.S. every year. While air quality in most cities in the U.S. improved over the latter half of the 20th century, air pollution remains a significant threat to tens of millions of people around the nation. The American Lung Association’s 2017 “State of the Air” report, released last month, revealed that 4 in 10 Americans live in counties that expose them to unhealthy levels of air pollution.

Climate change is making air pollution worse. Rising temperatures due to climate change cause more ozone and smog formation. Heat and drought result in more forest fires and increased dust levels. And climate change is causing a lengthening in the pollen season and higher pollen levels. 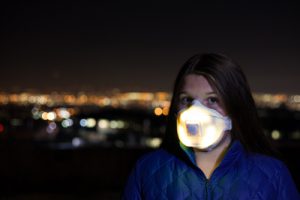 The air pollution “penalty” due to climate change makes it ever harder to attain clean air standards, and even more important to maintain and strengthen our air quality regulations.
The Clean Power Plan holds promise of significantly improving air quality in the U.S. by reducing pollution related to energy production in every state, but those regulations are now at risk, as is the Clean Air Act as a whole.

Given these powerful connections between air quality and climate, as part of its Year of Climate Change and Health APHA is focusing this month on the health impacts of both air pollution and climate change, and on why tackling both together makes sense.

The health impacts of air pollution are well known. Exposure to PM2.5 — particles smaller than 2.5 micrometers — is linked to increased respiratory disease, cardiovascular disease, diabetes and adverse birth outcomes, and there is growing evidence suggesting impact on brain development and brain function. Ground-level ozone contributes to respiratory disease including asthma and to cardiovascular disease. It may have an impact on cognitive development as well. Outdoor air pollution also causes lung cancer.

The U.S. is not alone in grappling with air pollution, as headlines about smog in Beijing or New Delhi repeatedly remind us. Indeed, the World Health Organization has found that air pollution is responsible for 6.5 million premature deaths annually around the world, 3 million of these from outdoor air pollution. According to WHO, 92 percent of the world’s population lives in places that do not meet WHO air quality guidelines. Many of the sources that produce particulate air pollution also produce climate pollutants like CO2, black carbon and methane.

The US Climate and Health Alliance is partnering with other health organizations globally on a campaign, Unmask My City, that highlights the threat air pollution poses to health and to our global climate, and that supports local, state and national policy action that reduces air and carbon pollution. While air pollution and climate change are global problems, cities and states can take the lead on many of the solutions, and Unmask partners are driving local approaches, tailored to their primary sources of air pollution and the responses that make sense locally.

Coordinated by the Global Climate and Health Alliance, Unmask My City launches today, World Asthma Day, in 10 cities on 5 continents. Using unique LED light-mask technology linked to handheld air quality monitors that measure PM2.5, the visual dimension of the campaign aims to help the public and decision makers visualize the air pollution people breathe in their daily lives, opening up dialogue about local solutions. Health organizations and their partners in Unmask cities are mounting events and activities to work with the public and policy makers to push for those solutions that will protect people’s health from dirty air.

In the U.S., Salt Lake City health professionals, led by Utah Physicians for a Healthy Environment, or UPHE, have joined the campaign. In Salt Lake, winter atmospheric inversions trap pollution from vehicle emissions, buildings, homes and industries such as refineries, intermittently earning Salt Lake City the dubious distinction of having the worst air quality in the nation. Drought and warming due to climate change are drying out the iconic Great Salt Lake, which is further threatened by planned water diversions, worsening the severe dust storms that cause very significant increases in toxic dust and particulates. All of this has serious implications for the lungs and the health of Utah and Salt Lake City residents.

UPHE and their partner organizations launch Unmask My City today with an expert panel discussion and photo gallery about the sources driving air pollution, the health and climate impacts of Salt Lake City’s poor air quality, and the need to focus on policy solutions that will lead to clean, healthy air for the people of Salt Lake City and of Utah.

Through Unmask, health organizations and health professionals in participating cities are pushing for solutions such as congestion charging to reduce car and truck traffic in cities; increased support for active transportation and cleaner-energy public transit; phasing out construction of new coal power plants; and monitoring and regulating sources of industrial and natural dust.

Reducing air pollution is a win-win, because everyone deserves to breathe clean air and live in a stable climate.

Check out the Unmask My City website and look for #unmaskmycity on social media!