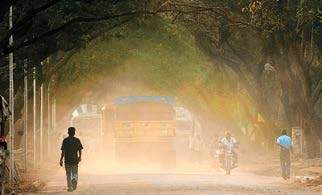 CHENNAI: A study conducted by the Coastal Resource Centre has revealed that the air quality in Chennai is alarmingly toxic.
Shattering the commonly held belief that only industrial regions and parts of north Chennai need to worry about air pollution, the study showed that indicators in elite residential neighbourhoods like Poes Garden and Boat Club Road are not much better.

PM2.5 refers to particles that are smaller than 2.5 micrometres and are known to carry toxic chemicals and heavy metals.

The study took eleven 24-hour samples from Chennai and the edges of the Chennai Metropolitan Area in April 2017. Six of the worst samples were from north Chennai.

“This is a public health emergency,” said Dr Rakhal Gaitonde, a public health specialist. “Studies have shown linkages between PM2.5 and respiratory and cardiovascular problems. In addition, manganese and nickel are well-known toxins.”
Emphasising the devastating effects that such a situation has on people’s health, Dr Hissamudin Papa, Founder and Director, HUMA Hospitals, said: “Fifteen-year-olds looked like they were still eight,” he said. “Women faced hormonal, menstrual and infertility issues. Further exposure dermatitis and skin related problems were visible, however, it was being mistaken for psoriasis.”

When asked about the role of the Pollution Control Board, Jayaraman said: “Why should people suffer just because the government decided to declare a certain area as ‘industrial’? The State Pollution Control Board is sleeping. No measures have been taken.”
The Coastal Resource Centre is expected to meet the Principal Secretary of the State Environment and Forests Department.

Breathe uneasy What is PM2.5?
It refers to particles that are smaller than 2.5 micrometres (more than 100 times thinner than a human hair) and are known to carry toxic chemicals and heavy metals.
What produces it?
The key documented sources of PM2.5 pollution are automobile exhaust, burning (coal, garbage and landfill), smelting and processing of metals.
Why is it harmful?
It remains suspended in the air for longer durations in comparison to other pollutants and travels great distances. PM2.5 particles go deeper into the lungs and can cause greater damage.

What is the
recommended standard?
The prescribed standard for the annual average of PM2.5 is 60ug/m3 in India while the WHO recommends a standard of 10 ug/m3.
How is it harmful?
Research shows that every 10ug/m3 rise in PM2.5, increases cause mortality between 3-26%, chances of childhood asthma by 16%, lung cancer by 36% and heart attack by 44%.